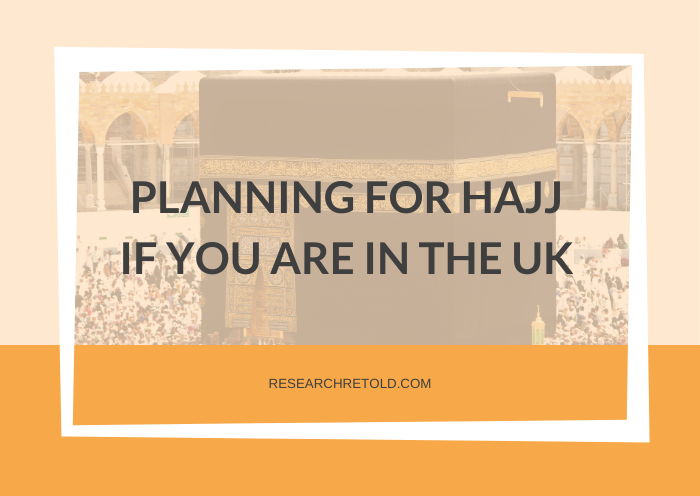 In this post, we share the most important details you must consider when planning for Hajj if you are in the UK.

This advice is the result of the research of Professor Seán McLoughlin from the University of Leeds.

His research focuses on mapping the UK’s Hajj Sector to tackle the lack of reliable, public and transparent information about planning for Hajj.

We also share our experience of collaborating with Professor Seán to produce the Hajj package explainer as a visual summary.

Hajj is the pilgrimage of Muslims to the birthplace of their faith, Makkah in Saudi Arabia. The fifth pillar of Islam states that it is their duty to travel there at least once in their lifetime, provided they have the health and wealth to do so.

If you are planning to go to Makkah any time soon, you might find it daunting to choose the right Hajj package. There are many details that have to be nailed down, and differentiating good deals from scammers can be tricky. Here is a checklist of the considerations you must take before booking your trip.

These considerations are based on research conducted by Professor Seán McLoughlin at the University of Leeds, in partnership with the Council of British Hajjis, and with the participation of Hajj sector stakeholders including pilgrims, Licensed Hajj Organisers and the UK authorities.

Due to the COVID-19 pandemic, many countries have implemented restrictions on crossing borders. Make sure you are up to date with the news. Also, consider if there have been any other alterations, for example, Brexit or CIVID19-related updates.

Up to 25,000 British Muslims travel annually to fulfil Hajj, which poses a great logistical challenge. The only travel agents licensed by Saudi Arabia to organise and sell Hajj packages are “Munazzams”. Only they have secure access to a certain number of Hajj Visas. There are other high street and online ATOL-licensed travel agents that can support them to organise and sell Hajj packages, but they do not have direct access to Visas. Only look to “do a deal” with licenced Hajj agents.

All travel companies in the UK must pay a Civil Aviation Authority “ATOL” bond. So, in case they go out of business, you can get a refund of your money. Make sure your package includes an ATOL certificate. If your trip has been cancelled and your Hajj agent has not refunded you, you can refer to the Financial Ombudsman Service.

This can give you an extra layer of financial protection as banks can trace transactions.

Navigating the process and planning for this pilgrimage can be difficult, but it is not impossible.

You can find more advice and resources in the Hajj Package Explainer for British Hajjis.

If you want to know more, you can go to the site of the collaboration which offers UK Muslims greater transparency on Hajj packages.

The team behind the Hajj Package Explainer for British Hajjis

The document presented is a visual summary designed by us and based on the findings from research conducted by Professor Seán McLoughlin. He works in partnership with the Council of British Hajj and other Hajj sector stakeholders, including pilgrims, Licenced Hajj Organisers and the UK authorities to support the Muslim community.

Professor McLoughlin wanted to create a guide with advice for travellers on travel regulations, advice if anything goes wrong, financial protection, information about those licensed to sell packages, visas and more. That is how the  Hajj Package Explainer for British Hajjis came to be.

Our collaboration to create the visual summary

We met Professor McLoughlin when we organised our first-ever research communication meetup in Leeds (oh, the days when we could meet in person and attend events in large groups!)

We agreed to kickstart our collaboration at the beginning of 2020, but the pandemic threw things off track.

Seán was interested in producing a document that he could share in his network and with the general public. The document needed to include the main aspects to think about when choosing a Hajj package. The objective of the summary was to make the process as smooth as possible for travellers and help them avoid any potential fraud.

The collaboration started with an initial client meeting where we discussed the main aspects of the project. Namely, the audience, the main messages, and the structure of the document.

Following on from this meeting, Seán wrote a summary of the text in PowerPoint. In his summary, he included clear explanations and guidance on the visual elements that he envisaged being part of the document.

This was helpful for two reasons. First, based on this rough sketch we chose icons and design elements that accurately reflected the culture and symbolism. Second, it sped up the process because we had a clear idea of the design direction.

Once we received the text, we edited and formatted the document, based on the insights of our initial client meeting. We wanted it to have a clear structure which anyone could follow. We also wanted readers to understand all the details they should consider to have the best Hajj experience.

For example, the guide includes notes on the changes in travel regulations due to COVID-19 and Brexit. It also gives advice on where travellers could ask for help in case their trip was cancelled. It covers what a Hajj package should include and insights on the Hajj industry and how to manage expectations.

The design process kicked off shortly after agreeing on the text, and three weeks later we had the final product ready.

“It was extremely useful to be able to work with designers who firstly, took the time to listen and ask intelligent questions about the research and could then work with ideas and suggestions to produce an attractive, professional output. I especially appreciated that Research Retold went the extra mile (or few) during the COVID-19 pandemic both to pick up the collaboration after a long break and then commit to working during the holiday season to ensure we met our deadline!” – Professor Seán

The final product is a 4-page visual summary of the main findings and messages, available in print and web formats. We hope you find it useful!

Do you have a document that you’d like simplified and brought to life? Get in touch at contact@researchretold.com to produce a document with accessible language and great visual elements!

This site uses Akismet to reduce spam. Learn how your comment data is processed.