Three reasons why presenting research in theatre is powerful 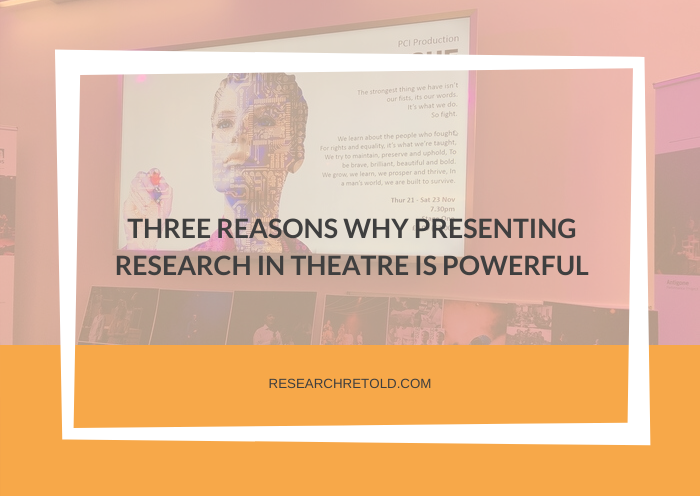 In this blog post, we share three reasons why presenting research in theatre is powerful.
The inspiration for this blog came from watching the play ‘SHE’ at stage@leeds at the University of Leeds.
The play depicted the lives of several women inventors and their struggles as they fought for their rights and equality. It left a lasting effect on our team and we enjoyed learning about women engineers in this format.
This got us thinking about why theatre is a powerful research dissemination method. 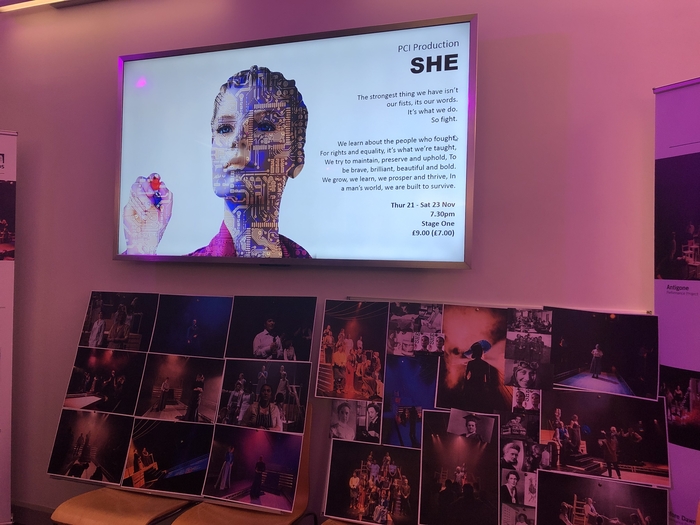 Engineering has been and still is a profession largely dominated by men. To counterbalance this narrative, SHE celebrates women from different eras who created the footprint women’s rights and equality.
The play was produced entirely by third-year undergraduate students of performing arts at the University of Leeds, as one of their assessments.
Professor Graeme Gooday, author of Domesticating Electricity: Gender, technology and uncertainty in Britain 1880-1914, offered encouragement and knowledge during the creation of the play:
[blockquote width=”]
“The students did their own research, looking at our Feminist Archive North holdings of Women in Science and Engineering in the Brotherton Special Collections. These contain copies of the Woman Engineer journal produced by the Women’s Engineering Society (WES) from the 1920s-50s.”
[/blockquote]
The cast highlighted 13 remarkable women and their journeys of passion, innovation and invention. These women were:

[blockquote width=”]
“As a matter of their own decision, the students opted to focus not on WES or the campaigns linked to it,  instead they looked at individual women inventors, discoverers and innovators in the USA and UK – as well as the Bletchley Park women.” Pf Graeme Gooday.
[/blockquote]

The actors told the stories of these women in a seamless and dynamic way. The use of technology, lighting and music complemented the play, making it engaging and memorable.
[blockquote width=”]
“I was very impressed at how the students found common themes across all of the characters chosen which they were able to weave together in a sophisticated multi-layered narrative. They really brilliantly captured the key points of the historical reality with both humour and deep pathos, crucially filling in the gaps of the record. After all, we don’t have much if any direct film or photographic records of the episodes retold by the students on the show, and they were able to bring these stories very effectively to life!” Pf Graeme Gooday
[/blockquote]
As audience members, we experienced a wide range of feelings, joy and pride, sadness and motivation, as we empathised with the characters and their courage, boldness, brilliance and beauty.
The women showed strength as they fulfilled their dreams, made history and changed what we know to be the world we live in today.
In terms of the production quality of the play, the students did a brilliant job of telling the stories of these women. Although the play was put together in only eight weeks (from idea to final showcase), production was impressive. From costumes and lighting to the script and delivery of lines, the passion of the actors shone through and created a strong connection with the audience.
We’ve previously talked about creative methods of research dissemination. We focused on theatre as one of the five methods, highlighting Pf Sharp’s experience with presenting her research in a play. In the next section, we focus on three reasons why presenting research in theatre is powerful.

Reasons why presenting research in theatre is powerful

We often think about presenting research as a word-filled document. While this format can be effective in certain contexts, it does not engage people the way theatre does.
Theatre engages people by building an emotional connection between the audience and the actors telling the story. This connection increases relatability and making the story more powerful.
Having this emotional connection also increases the chances of the research being more memorable than a written piece of work. We tend to connect and remember visuals rather than text, as the latter requires more concentration and may at times not be very easy to remember.
In addition, creativity, music and lighting all play a part in facilitating this emotional connection and allowing the audience to be transported into a new world.
Lastly, the audience goes through a rollercoaster of emotions alongside the actors. By experiencing a spectrum of emotions, people remember the facts and the story that’s being embodied on stage. As a result, the public connects more with the research.

[blockquote width=”]
“I felt very encouraged and motivated as I left the theatre. The women’s stories were very heartwarming. At the same time made me feel like I could go and take on the world! I learnt so much while also having fun and laughing.” Grace Maina.
[/blockquote]

Theatre simplifies complex information by weaving facts into storytelling in a seamless way. This is extremely effective especially if the play tackles a topic of current interest to the public. In this case, the play’s subject fit into current discussions and debates about women in science and technology.
Moreover, theatre is an appealing form of art for people, making it a perfect avenue for tackling complex societal issues. In this relaxed environment and through the voice of a character, people let down their guard and allow new ideas and concepts to enter their awareness. This can change how the audience thinks about certain topics affecting society today and makes it easier for people to engage with research.
Lastly, the key to transforming the public’s social understanding is empathy. People put themselves in someone else’s shoes, thus grappling with their challenges and bringing to light issues that they might not have been aware of.

The final reason why presenting research in theatre is powerful is because it is entertaining. Good plays and musicals leave us wanting more. Thus, presenting research in a high-quality, well-produced and well-executed play can be dynamic, fun and intellectual, all at the same time.
Presenting research in theatre creates a low entry barrier to a complex topic. The audience doesn’t have to do much as the actors present the information in easy-to-understand ways. Add to this an element of fun and entertainment, and you have the secret to presenting research in accessible ways.
[blockquote width=”]
“Yes, I think theatre can be an incredibly effective way to present research. It can bring in new audiences and tell stories we might not be able to tell in other formats. I thought the play was very engaging, enjoyable and inspiring. It felt like there was something for everyone!” Dr Elisabeth Bruton, Curator of Technology and Engineering at the @sciencemuseum
[/blockquote]
Moreover, theatre enables people to escape their day to day lives taking them into a different reality. Theatre can bring family and friends together to experience something different. At the same time, it provides intellectual stimulation and social interaction outside our day to day lives.
Similar to this, McIntyre (2007) states that people visit galleries and museums for social and intellectual drivers. They combine ‘entertainment’ and ‘self-improvement’ as key needs and motives. 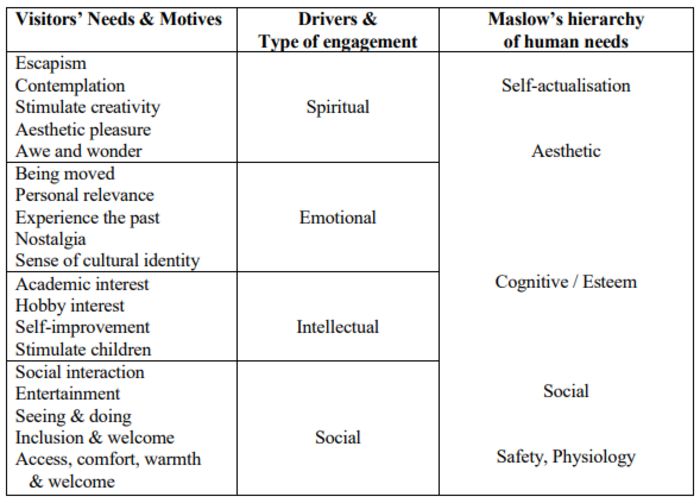 SHE was a great example of why presenting research in theatre is powerful. We laughed and had fun while gaining valuable knowledge on so many powerful women. This heart-warming play left us inspired to keep going and not give up regardless of the obstacles along the way.
[blockquote width=”]
“Judging by the feedback gathered by the show’s student producer/publicity lead Maria North, ‘SHE’ was effective at getting across the importance of recovering women’s stories in creating, inventing, innovating. That was the key message of the project!” Pf Graeme Gooday
[/blockquote]
Many thanks to the cast for such a wonderful experience! 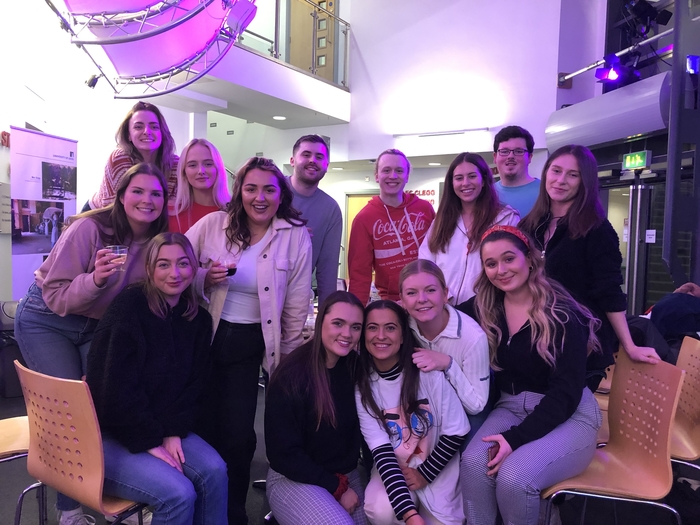 So what are you waiting for? Grab a ticket at your nearest local theatre and support local artists – gain more knowledge on what is happening around the world while having fun!
Many thanks to Grace Maina, our Content and Communications Coordinator, for contributing to this blogpost with research, writing and editing.

In this blog, our graphic designer, Sam, shares step-by-step what we went through for rebranding Research Retold.

How to create compelling and impactful presentations

Do you have to create and give presentations in your line of work? Are you wondering how to create compelling and impactful presentations? Do you struggle when preparing? These are some of the ideas addressed at the event “Master the art of communicating: A virtual...

How to optimise your LinkedIn profile as an academic

Many of our research clients use LinkedIn and have expressed interest in improving their profile. So we decided to gather some tips and insights from our team and other academics who encountered the same challenge. In this blog, we share concrete suggestions on how to...

Impact of tooth decay on children and their families: a visual summary

Do you know the impact of tooth decay on children and their families’ wellbeing?  In this blog, we share the insights produced by the PhD research of Rebecca Knapp (@r_j_knapp) on this topic. She is a student at the Person-centred and Population Oral Health | Clinical...

In this post, we share the most important details you must consider when planning for Hajj if you are in the UK. This advice is the result of the research of Professor Seán McLoughlin from the University of Leeds. His research focuses on mapping the UK’s Hajj...

How to run a virtual conference in 13 steps

To discuss how to run an engaging virtual conference, we’re collaborating with Diego Bermudez, PhD student at Cardiff University. Diego’s research focuses developing resiliency and sustainability on payment technologies, and he is based in the Cardiff Business School....