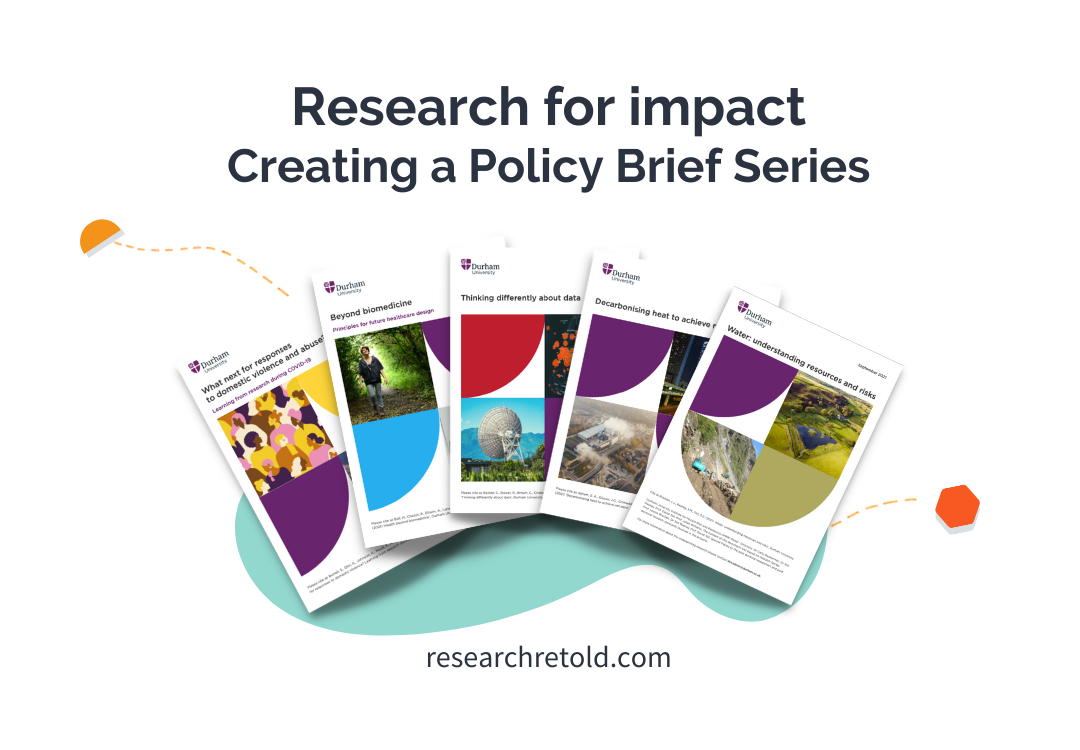 Have you ever thought about how to make your research actionable? Would you like your research to create a positive change in society? Creating a policy brief of your work can help you.

Research can support evidence-based decision-making if you make your research accessible to non-academic audiences. At Research Retold we collaborate with researchers to tailor their key messages and create accessible documents for their audience.

In this blog, we share our experience in creating a policy brief series in collaboration with researchers from Durham University and the lessons we learned on how to work with many researchers and disciplines simultaneously.

We were approached by the Senior Policy Engagement & Impact Manager at Durham University to create a series of documents that would showcase the sterling research carried out in this institution. During the discovery call, we discussed this idea and refined it further. We decided to create a policy brief series that would group different projects under a common topic. The selected topics were:

“ A policy brief is a concise summary of an issue, the policy options to deal with it, and recommendations on the best option.” – Research Retold

Additionally, we agreed to produce one-pagers, social media assets and one-minute videos using the same design and structure to bring to life the key messages of the documents.

Once the topics were decided, several researchers from different projects were asked to participate in topic-focused workshops. During the sessions, we worked to identify a common angle to bring together their projects, as well as the target audience they would want to influence, be it government bodies, business people, non-governmental organisations or civil society organisations. Since this multi-project approach was new to us, we were very excited (and a bit nervous) about the sessions. Each one was a bit different from what we expected.

The first workshop was on the topic of “Domestic violence and abuse during the COVID-19 pandemic”. We worked with researchers from the Centre for Research into Violence and Abuse (CRiVa). It was interesting to observe that even if the researchers worked on different projects, they shared the observation that there was a rise in domestic violence and abuse cases, not only in number but also in intensity. This common conclusion helped us settle on the angle for the document and tailor the recommendations to a policymakers audience. 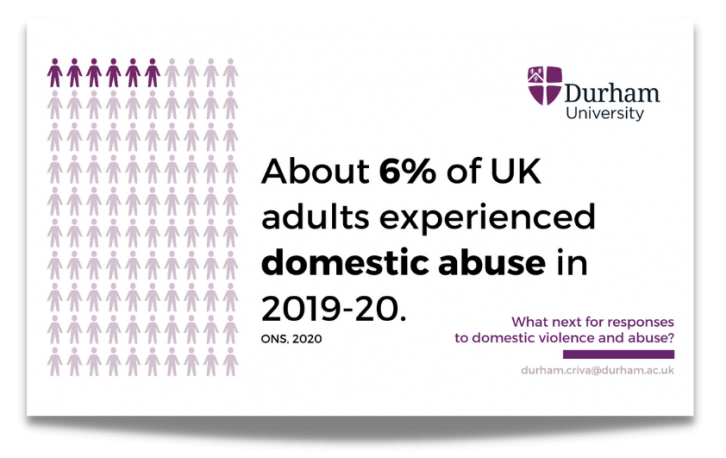 Finding the common line in the second session on “The future of healthcare” was a bit more complicated. The research projects encompassed broader topics, from managing chronic pain to hearing voices and thus, finding a common focus was not as simple. However, after some debate, we reached the conclusion that the principles for healthcare from Durham University were present in all of their projects, and thus, this was the common line we chose for writing up the document. 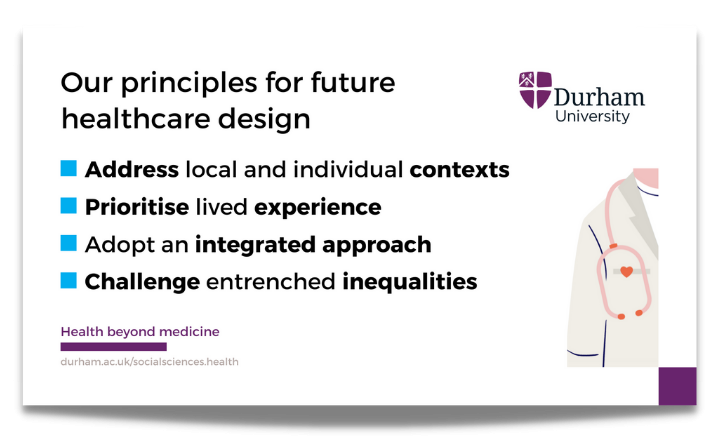 The third topic was perhaps the most difficult to tackle. The projects carried out by researchers which involve the manipulation and analysis of big data were from various different disciplines and departments. It was not possible to agree on a common thread during the main workshop because of this. After having group and individual discussions with the researchers about their projects and their key findings, we reached the conclusion that a common line could be the innovative approaches they took towards data. For example, applying techniques from computational cosmology to improve the government benefits systems. Thus, this policy brief showcases their innovative ideas and cautionary notes on the use of big data and its inherent biases.

During the workshop on “Water management” we encountered projects that looked at water as a resource and a risk. The researchers from the Institute of Hazard, Risk and Resilience (IHRR) were enthusiastic about sharing their work, however, it was hard to find a common angle. In the end, we decided that taking a holistic approach to water management was the best option to go forward.

New satellite-based monitoring techniques can detect movements in tailings dams, before they reach a state of failure and collapse. Such measurements can provide advance warning of collapses, potentially saving many lives. – Grebby et al, 2021

The final workshop on “decarbonising the heating sector” was smooth. Similarly to the first workshop, the researchers from the Durham Energy Institute (DEI) working on this topic had a shared objective and each project works on a different aspect. This created a fluent dialogue and direction for the document. 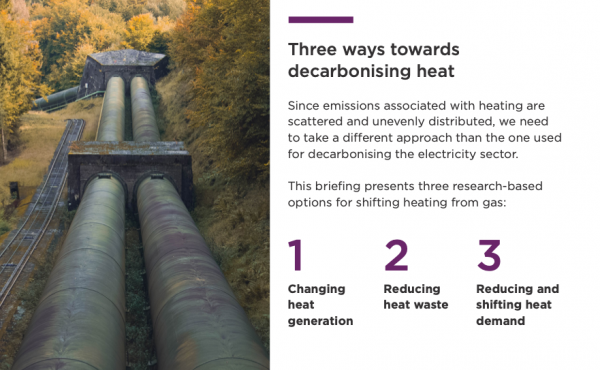 The next step after the workshops was for the researchers to write their key messages and recommendations and for us to provide editorial feedback. However, since we had six researchers per workshop on average, accommodating timings for all to write and give feedback in each group before the document got to our hands proved difficult.

In various cases, the researchers provided a summary of their findings and the original material, i.e. journal papers, and thus, we took on the task of translating the academic text into more accessible and digestible copy. Doing this allowed the researchers to invest a smaller amount of time on this side project and for us to produce a policy brief series based on first-hand sources.

Another challenge we faced during this step was the fact that after creating the first iterations of the document, some researchers did not agree with the focus given to the policy brief. This was sorted by assigning a representative for each topic who would be responsible for pointing out the direction we should take while providing the editorial feedback.

The content was finalised after several iterations. It was now the turn of the designers at Research Retold to produce the design for the policy brief series according to the branding guidelines of Durham University. Each of the briefs had a specific focus, but the overall design direction was similar in style, mainly driven by high-quality photography, rather than icon-based. 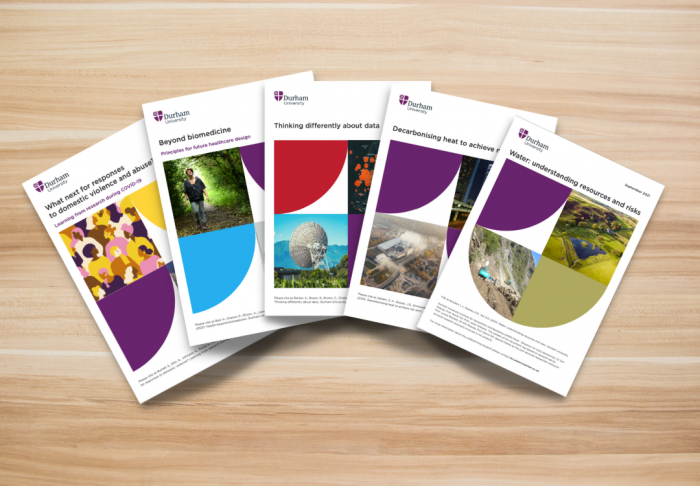 The finishing step of the collaboration was to create the one-pagers, the one-minute videos and social media assets that researchers and the communications team of the university could use to promote the policy brief series. Stay tuned to their social media accounts! 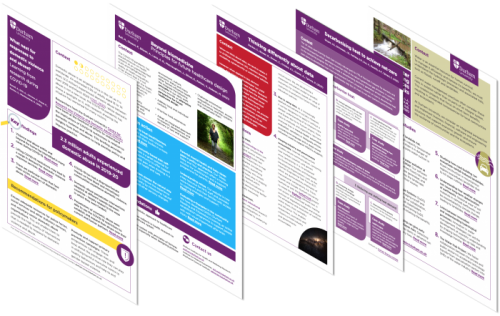 During this collaboration, we produced a policy brief series that encompassed 33 projects and 30 researchers on five topics that currently impact society. Working with so many collaborators simultaneously was challenging, but also very enriching.

While delivering the workshops we observed that each group had a different dynamic, so we adapted our internal processes to cater to their needs. The learning we take from this collaboration can be summarised to: 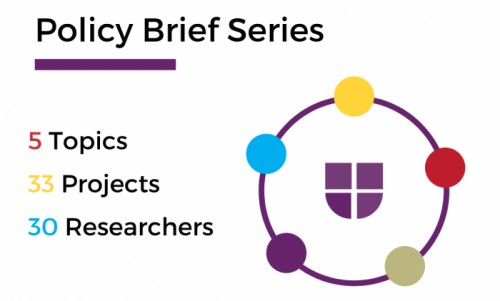 We are very grateful to have been part of this collaboration and have learned more about these important topics affecting society today. We hope the dissemination of the research carried out by Durham University will create positive and lasting changes in future policies.

Many thanks to our Research Communicator Phebe Bonilla for compiling the information for this blog post and for her involvement in making this project a success alongside our ninja designer, Sam Brown.

Here is how we organised a bespoke workshop for the GreenPole research group in Stockholm.

Career paths after a PhD

Read about three different career paths after a PhD: doing a postdoc, transitioning to industry and entrepreneurship.

Telling a story with data

In this blog, we share the process of creating a visual summary for our latest collaboration with Dr Jenny Brierley-University of Sheffield.